An unexpected trip through time

At BristolCon this year, I harvested some very speculative books from the 'free' table, as well as a couple of gems. One of these was by Clifford D Simak, and was called 'Space Engineers'. What an eye opener.

Simak is one of the 'Golden Age' writers, although the definition of exactly when the golden age was is open to argument. The only thing I could remember reading of his was 'Shakespeare Planet' where a disparate group of travellers, mapping the apparently random star-tunnels, get trapped on a world were the tunnel has no controller. I figured I as in for a similar bet with Space Engineers. Did I ever get a surprise.

Now, I have to admit (slightly shamefacedly) that my first affair with SF involved a gent by the name of E E 'Doc' Smith. He's famous principally for the seven Lensman books, or perhaps the four books of the Skylark series. I lived it. I all but memorised it. Only when I was quite a bit older did I realise that it was the most hackneyed, corny space opera ever written across decades from the '30s to the '60s. Having said he was corny, in 1966 the Lensman series was only beaten out of the  World Science Fiction Conventions 'Best All Time Series' by ............ Isaac Asimov's Foundation Series.

So here was the shock. 'Space Engineers' was terrible! Honestly. It was the worst of jingoistic American space opera, mixed with insubstantial science and huge doses of Deus ex machina. It was barely a novella in length, and had cardboard cut-out characters with square jaws and the right stuff, or coming over like a cross Barbara Bain in Space:1999 and Jessica Rabbit.

And still I read it from end to end and enjoyed every moment, spun back through time to a freezing cold bedroom, the blankets propped over my head, reading by torch after lights out and poking my head out when I started to run out of oxygen. Nostalgia is a funny thing.
at 12:05 4 comments: Links to this post

Email ThisBlogThis!Share to TwitterShare to FacebookShare to Pinterest
Labels: Personal, Reviewing others

I was browsing the blog of Xchyler publishing and saw this image in a selection of sage sayings from their various writers. It left me absolutely helpless with laughter for several minutes, much to the irritation of my partner and the confusion of one of my cats .
at 09:31 No comments: Links to this post

Maverick by Robert Harkess - out now 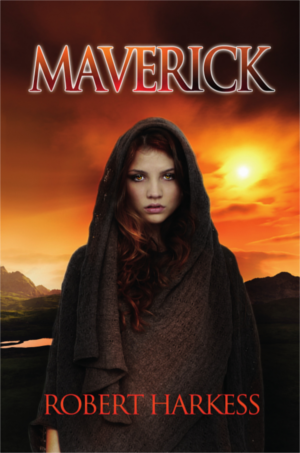 They settled their world hundreds of years ago, turning their backs on technology, closing the Gate behind them. When their children began to develop impossible powers they rejoiced and called them Golden – until they took over. Now the Golden are feared
Elanor comes to her powers not as a child, but as a young woman – a Maverick. The Golden are rumoured to do terrible things to Mavericks, so Elanor runs.
Anatol has travelled from the home world, decades of suspended animation, to stop the Gate malfunctioning and destroying both worlds.
He and Elanor collide, and form an uneasy truce of science and magic


Metaphoric Media and Robert Harkess are excited to announce that Maverick is now available on Amazon.

'Maverick' is a new writing direction for Robert. Previously known for his Young Adult books Warrior Stone: Underland and Aphrodite's Dawn, this is his first foray in mainstream writing

The Evolution of Reading Habits

I've recently been pulled in by 'Stormcaller', by Tom Lloyd. Its Epic Fantasy, which normally just doesn't do it for me any more. In fact, I'd binned two similar books immediately before it, trying to clear space on my 'To Read' shelf for whatever swag I could lift from BristolCon.

Epic Fantasy is something I just don't get into these days. I used to. I used to consume it voraciously. I would read Lord of the Rings in three days, or the Chronicles of Thomas Covenant in a week. Multi-book things were reading of choice.

But that was back in the Nineties. Channel 4 was new and edgy, and CD's were only just coming out. I had an Amstrad Word Processor, because there was no Internet, and PCs were still only in offices. I had two hours of commute, and nothing worth watching on the TV. Books were everything.

Now, I have fifteen minutes a night before I go to sleep. If I have free time, I'm usually writing, or editing, or doing something related to the production of books. I just found out there are five books in Lloyds series. That's almost a whole year of reading for me, and I have 26 books on my 'To Read' shelf.

So I may not even bother to finish this book, now I know there are five of them. The probability of reading the rest of them (and it looks as though #5 may not even be the final part) is vanishingly remote - not because they are no good, but because I don't have the time.

I may have to reassess.

The Maverick is coming